As i’ve mentioned before, usually through the summer, i’ll abandon running for the mountainbike. The last couple of years, i’ve got past the late May bank holiday, traded trainers for pedals and not run with any severity until late August. Well, with no trip to the mountains on the bike, i’ve possibly ridden less this year than any time in the previous 10 or so. Juneathon didn’t help, but was a laugh (with hindsight) and a challenge and next year i’ll do all the days and break 100 miles. Honest.

Following Juneathon I was a skinny whippet, struggling to keep weight on. Now, that’s all changed. I seem less able to do anything without breaking into a horrendous sweat this year than ever, so combined with eating out and drinking more than I have since I was in my early twenties, it’s time to reign myself in and hit the running, cycling and upper body exercise hard before I turn into a bloater. Oh, and if i’m going to do the Ashford 10k in October in less than 45 minutes, i’m going to need to find speed, too. And plenty of it.

So, yesterday the upper body was attacked.

I’ve just got in from 4 miles around the village in just over 32 minutes. I’m getting a haircut tomorrow so heated up too fast, but i’ve never suffered sweat running into my ears before. Is that an age thing? Hope not, I don’t think I fancy handling that in future life. But apart from getting a stone lodged in my shoe forcing a stop for removal and seeing a speedwalker twice (then a third time walking past the house while I was talking to the best girl in the world on the phone just after I got in), it was pretty mundane.

Tomorrow will see weights again, then i’m packing for a trip to Cornwall over the weekend. Where these last three days effort will undoubtedly be undone. But in the most fun way imagineable with  company i’m madly happy to spend time with so it’s all good.

Still, a regime of 4 days exercise with a day off will prevail afterwards, just as I used to, so all will be well.

Other than that, i’m down to 199 cars, July totalled 55.5mm rain (compare 75mm last year so this summer isn’t as bad as it seems…until you see July 2006 had 3mm!) and so far we’ve had 4 wet days this month totalling12mm. There are still 10 sheep in the field and now, it’s time for ironing.

Ok, I admit, things have been slow on the exercise front.

The temperature has at last reached the levels that prohibit me from doing much and while I run in sleet and snow and like a cold house to sleep in (which may have to change on selected evenings this winter [with any luck!]), I can’t carry on in the heat such as it is.

So, aside from having disappointing quantities of sheep whenever guests arrive, not skydiving much due to enjoying other areas of life to keep me out of the sky and removing several million atoms of kneeslider on Sunday afternoon, life’s been un-bloggable.

But it’s all good. I’d like to be a touch less tired, something i’m about to take steps to sort out with inordinate hours of sleep for a week night, other than that, the mountain bike should get a thrapping on the weekend and if the temperature goes low, i’ll run again.

Until then, 12mm rain last night (most of which I walked back from the station through), 2mm evapouration today, 211 cars and 10 sheep. Honest!

Earlier in the week, I made a comment on the blog about hearing sheep in the field behind me whilst I wrote. This got backed up in conversation to confirm there were 22 of the extravagant lawn mowers in total and they were worth a look. Well, what always happens in these circumstances? They were shipped off to leave 3. I’ve been accused of having a blog named iliketocount when clearly I can’t. I’m not going to re-name it, though, not even to iliketocountbutaren’tverygoodatit because I can. But, by the evidence in this photo, that may seem accurate. 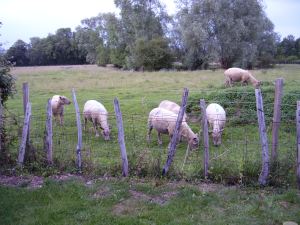 So, since Tuesday there are 3 more sheep. If the number increases, i’ll let you know. Until then, please don’t judge me a liar, eh?

My greenhouse is doing marvellous things, too, but this being June and Juneathon being very much on, that isn’t important. Getting out of work is, though, and I managed this at 5.25 today so proceeded in a southerly direction to the seafront to be greeted by a wind of epic proportions blowing due West, right in my nose in the outward journey. And the tide was in. So bar a few fishermen, 2 other runners and a few kite boarding oddities, it turned out to be a fairly quiet run. Until I was shocked as I passed the White Rock Theatre to come up behind 2 females, one possibly the other’s mother (it is Hastings, so I hate to presume too much), the younger one appearing to be an early teenager, quite pretty with her hair in pigtails, to be exclaiming “That was awful. It was fucking freezing!” This seemed so out of place and wrong, I was not quite shocked (this takes a lot nowadays), but certainly taken aback. Wonder what school she swears in to improve knowledge of relevant swearing participles and useage? Wrong, so wrong.

So I scuttled off to the car drove sensibly home, took my photos and here I am.